Around the World in 180 School Days 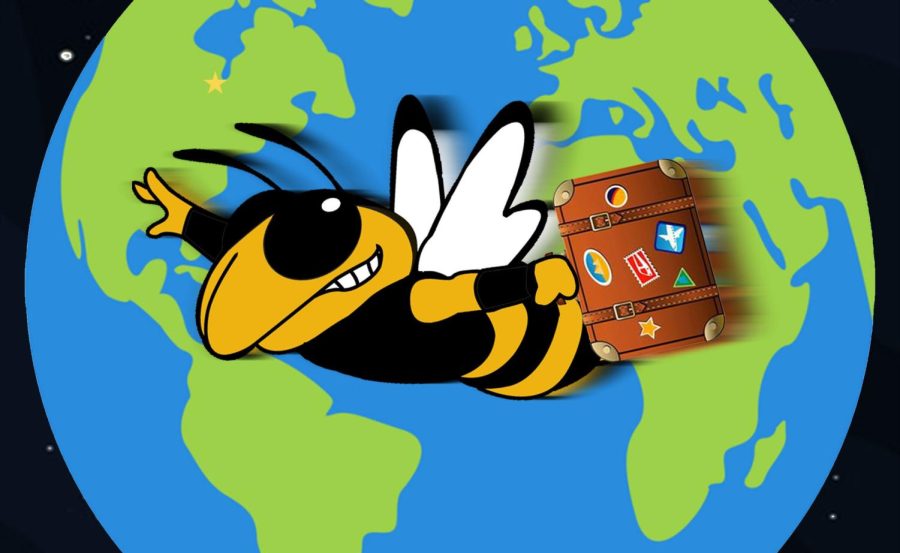 The majority of students at Hinsdale South have an immigrant background. This deserves to be acknowledged and celebrated.

Senior Ally Popa was 14 years old, yet she had never stepped foot outside of Romania. Born and raised in the industrial city of Ploiești, she prepared to emigrate with her family to the United States.

Ally and her family departed from Romania’s capital, Bucharest, in June 2017. The 5000 mile trip to Chicago filled Ally with excitement.

“At the time, I didn’t feel scared or sad,” Popa said. “Those feelings came later.”

While Ally anticipated a typical American high school experience like the ones depicted in movies (which, she would later note, turned out to be “very fake”) she also reminisced on the friends and family back home in Romania.

“I was leaving behind the people I had grown up with my entire life,” she explained.

Ally’s story isn’t necessarily uncommon. According to the Pew Research Center, roughly one million people immigrate to the United States each year. As of 2018, there are more immigrants living in the US—roughly 45 million—than any other country in the world.

Immigrants come from every corner of the world, yet their struggles in the United States seem universal. Language barriers are especially daunting to immigrants. They interrupt the process of acclimatizing to American culture, and they make it hard to forge new friendships and connections.

“My English isn’t that bad,” said senior Ann Serrano, who immigrated from the Philippines when she was 16. “But for some reason, it prevented me from socializing [my] sophomore year.”

For teenagers, the public school system is another obstacle altogether.

But beyond the occasional light teasing, immigrant students sometimes face bullying and exclusion.

Junior Jamila Nadine Booc still remembers the comments her classmates would hurl at her during lunchtime in elementary school. She remembers the hot and prickly feeling of shame as her peers labeled foods significant to her and her Filipino culture as “smelly.” She remembers the teasing that only worsened when she started to explore her interest in other cultures by watching foreign TV shows and reading Manga.

“It got to the point where I stopped doing everything that made me unique from my classmates because I wanted to fit in,” Booc said. “For years, I hid who I really was.”

But as Jamila has gotten older, she has been on a quest to rediscover herself and what it means to be Filipino. Her shame has faded, and she now feels more empowered by her culture than ever before.

“I [have] slowly started opening up about growing up as a Filipino immigrant. Now, I’m happy to say that I don’t care whether my food or interests are considered ‘weird’ anymore.”

This struggle of remaining true to one’s roots has played a crucial role in many immigrants’ identities and stories.

“I’m proud of my identity now, but there was a time when I was younger I wished I was from a different ethnicity of people—a more privileged ethnicity,” explains senior Reeshail Arif, who immigrated from Pakistan. “However, I don’t feel that way anymore! I love my culture and all the GOOD things that come with it.”

As they come to terms with their identity and self, immigrants have also reflected on their time spent in the United States as a whole—including some surprises they encountered along the way.

“I was mostly surprised that a lot of the stereotypes about the US are mostly false. Whether it’s the fat people jokes, food fights in the cafeteria from the movies, etc. Pretty much the movies lied to me,” joked Serbian senior Teodor Kljaic.

Senior Deividas Karpusenka explained that moving to the United States from Lithuania required him to make new friends and “build his image again.” But he welcomed the challenge as a rite of passage. “Every immigrant struggles and has issues with moving, since it is a drastic change in life and it is impossible not to feel homesick.”

Ally Popa continues to wrestle with a similar nostalgia, regularly messaging and Facetiming her family and friends in Romania. At the same time, she, like many immigrants, has found a community in the United States with which to share her experiences.

Junior Esther Chukelu, who immigrated from Nigeria, has embraced her new American life. “I have gotten to love it here,” Esther said. “I found people that know me and others that are the same as me and it makes me feel happy that I am not alone.”