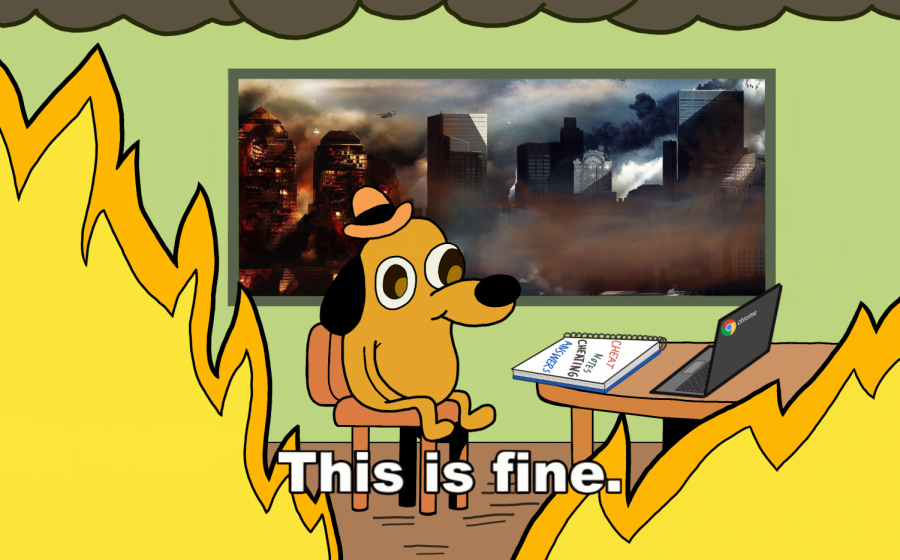 What can be done about cheating in a remote setting?

Ever since District 86 announced its decision to start the 2020-21 academic year remotely, teachers have worked to ensure that the global pandemic doesn’t come between students and a quality education.

One obstacle to maintaining this quality education is the prevalence of academic dishonesty in a remote setting. In an effort to retain academic integrity, teachers have directed their attention towards using security measures such as Go Guardian, ungoogleable questions, time limits, and live cameras including views of students’ workspaces during testing.

“I think that the [the security measures] add a layer that helps eliminate a small amount of cheating,” said Andrea Smith, FACS Teacher.

However, despite these efforts, academic integrity remains looser than ever.

A staggering percent of teachers have observed an increased inconsistency in student ability demonstrated in the classroom compared to on assessments.

The reasons behind these discrepancies are clear. In a remote setting, students can more easily consult an older sibling or personal electronic devices or any other means that cannot be monitored by teachers. To put it simply—cheating has never been easier.

Add to that, the lack of a teacher being physically present in the testing room makes cheating seem less intimidating. This causes students to feel less of a pressure to comply with the academic standards since they feel more estranged from the ramifications (i.e, social humiliation, a failing grade, etc) of their actions. Consequently, this has led some students to justify cheating in a remote setting to be not as serious or ‘real’ as it would have been in the past.

Not only is this belief impairing student learning, but is also causing other students to feel discouraged by the actions of their peers. “Hearing about our classmates cheating on tests without consequence has been incredibly demoralizing for some of my classmates and me,” one South student said. “Those of us who would never cheat are struggling to maintain our morals and standards since it’s so easy to cheat, and students who don’t put in the effort are receiving the same grade as we are.”

Teachers have also wrestled with this demoralizing aspect of remote testing. Some, such as English teacher Kristin Wimsatt, have redesigned the format of their tests in an effort to curb cheating. “I moved in a direction of different types of assessments,” Wimsatt said. “I’m having [my students] do journals, which helps me get a sense of if they’re reading [the text], what they’re understanding, [and] what they’re not understanding. It’s a much more authentic type of assessment in this era.”

For other teachers, testing has become a matter of reconfiguring questions, while still recognizing the acute potential for cheating. Rather than using factual questions, many have opted for ones that require in-depth analysis.

“Our challenge as teachers is to write questions that assess what we want, at least, broad concept-wise, and they can’t just be a regurgitation of facts,”  math teacher Heddi Sirovatka said. “It has to be something deeper than that. ”

While reformatted assessments may help hinder cheating, the in-depth analysis aspect requires students to have a greater understanding of the concept than they otherwise would have had to before remote learning. This has consequently increased the difficulty level of tests and pushed students to new lows—both from a test score standpoint and an ethical one.

For some students, cheating has become a matter of improving or maintaining their GPA amid the added stress of the pandemic. As a result of the remote and hybrid model, the lack of continuous exposure to content and a notable decrease in in-person teaching has caused students to struggle to grasp and/or retain concepts. Thus in moments of stress or panic, sometimes cheating appears to be the only viable solution.

While the desire to perform well on assessments is understandable, cheating risks enforcing the narrative that one isn’t capable of tackling problems on their own without resorting to unethical measures. And while the tactics for cheating students employ are covert—and even, to some extent, creative—they’re nonetheless questionable. Whether this inventiveness will manifest itself in more intricate forms of cheating or more impactful applications, however, is yet to be determined.