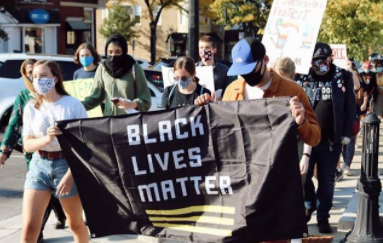 For centuries, protests have been a way for people to voice their concerns and displeasure with the way things are done. They have given people a voice and a way to congregate with others who share similar beliefs, unite against a common issue, and influence powerful individuals to implement change. Protests are essential in a democratic society. As of late, with the Black Lives Matter movement being the largest civil rights movement in American history, they’ve become especially important and have given rise to younger people, such as high school students, wanting to bring about change and contribute to the movement. In comes Hinsdale for Black Lives Matter (BLM), a student led coalition co-founded by Hinsdale Central senior Mohammad Ahmadi with a goal to bring forth positive change to the Hinsdale community and educate others on racial issues.

On September 25th, Hinsdale for BLM hosted their second protest. It was the organization’s first protest against environmental racism and it was one that they brought to the bustling downtown Hinsdale’s Burlington Park, where people were bound to notice a protest. The organization announced on their Instagram page that they are looking for writers, speakers, musicians, and poets to share their creative work at the protest, as long as it was on the topic of environmental racism. As a writer, I had the opportunity to attend the protest and the honor of getting a chance to speak among several other talented students who used their voices and creativity to illustrate the dire impact of environmental racism.

The speakers were expected to meet early with the organizers to discuss the schedule for the protest. I remember how I felt when I arrived at the meeting point at Burlington Park, slightly stunned as I began to take things in. I knew that Hinsdale for BLM was a student led organization, but it felt more concrete meeting the founders—students just like you and I that were full to the brim with passion and eager to use the current momentum to bring forth change to their communities—and less of this mystical organization that I follow on Instagram because I agree with and support their posts. Right off the bat, Ahmadi’s passion was evident. I silently observed as he gave directions, explained the route for the march, and organized the protesters that began to filter in, making sure everyone was on the same page.

First and foremost, instructions were given to all of the protesters. We were told to not engage with police and counter-protesters due to how there was an incident in the past where counter-protesters “confronted and yelled at [protesters], aggressively put their phones in [their] faces while recording [them].” Most importantly, we were told to keep our masks on and maintain social distancing.

The protest started off with a student from Naperville North, a girl named Jocelyn, performing her song about environmental racism as people began to filter in. She strummed her ukulele and began to sing a lilting melody as the sound of her deep vocals soon enveloped the park. Her song was sweet, but the message was grim—it painted an image of pink skies and the promise of rain but in actuality, the air was full of pollution and was evident that change needs to happen and that we’re running out of time. The contrast of her honeyed vocals in her song and dire message was chilling and everyone listened quietly, taking it all in.

After Jocelyn’s song and the round of applause that soon greeted her came, the organizers of the protest and a few speakers that prepared a speech announced their demands clearly through a megaphone while perched on the wooden benches in the park. The demands included but were not limited to: comprehensive and intersectional climate education in the classroom, a climate emergency declaration by Hinsdale and neighboring towns, the passing of the Green New Deal, and the Climate Equity Act by Congress.

Then, we began our march. Ahmadi and three of the other leading organizers of the protest took to the front with megaphones to shout the march chants into, and they had a barrage of signs to accompany them. The middle of the crowd had four of the other organizers with signs to hold into the air, and towards the back, the final three organizers from Naper Youth for Black Lives Matter flanked the ends. A protester near the middle was carrying a stark, Black Lives Matter flag billowing behind them, almost as though it was the cape descending from the protesters. We made a total of 3 rounds around downtown Hinsdale, while shouting the march chants:

Ending on a powerful note with the ending sentence –

After the march, the protesters filtered back into Burlington Park where we all sat in silence in the dewy grass, worn out from walking during the strike and listened to the speakers.

The post march performance was conducted by Claire Liu from Naperville North High School, who performed her play “Only a Game” with four of the other protesters, Payton Day, Abby McKenna, Zoe Day, and Sam Rosenberg. Nothing about their play was silly or lighthearted despite the word “game” with its positive connotations associated with it being in the title. In “Only a Game”, the five girls with a background in theater took on different roles. The game that they were playing was a riff on the game Monopoly, and was instead titled “Veropoly” whose tagline was “A new look at the very vicious world.” “Veropoly” illustrated how people of color are disproportionately impacted by the roots of systemic racism that are still affecting them to this day, such as the education gap from Black people not having access to proper schools and funding. They explained how lack of access and funding towards education leads to the economic disparity between white and Black people, because the lack of education leaves Black people with no choice but to take up menial jobs to pay the bills. When they began to “play” the game, the girls each picked a color to start, and those with the cooler colors (representing white people) started off with bonuses that advanced them far more in the economy and their net worth than the girls who had the warmer colors (representing people of color). In the end, the characters the girls played that had the “warmer colors” no longer wanted to play with the girls who had the “cooler colors” because it wasn’t “only a game”. They were being faced with unfair problems simply because of their color.

After Jocelyn returned to the stage to sing her song once more, it was my turn and I went up to read my poem out loud. Going up, I was a bundle of nerves. Seeing all of these extremely intelligent and creative teens before me definitely made me feel a bit out of place, but I bit the bullet and tried not to let my nerves show as I walked up to the bench where’d I’d be perched, reading my poem out loud into the megaphone.

The water is drowning in poison,

The air is choking on smog.

I’m fighting against all of these voices

But it’s like my words are shrouded in fog.

Their lungs are rattled with lead.

That our sickness is one they’ve bred.

As though our lives don’t matter.

With my spirit the flag

That gets shredded to tatters.

Why does our Blackness make us disposable?

Why are we seen as something to be Sacrificed?

We all bleed the same, in the end

So why is compassion

something that needs to be enticed?

I’m tired of being agreeable

And asking for change.

I refuse to listen to my struggle be called trivial

And have to suppress my outrage.

We will force their eyes open

And make them see our plight.

We will no longer be some token

For them to use and toss and slight.

We will seize this momentum

Because our voices are instrumental

And we will no longer be denied.

The applause that greeted me after I was done reading my poem made my chest swell with pride and happiness. I realized that despite the fact that I was a bundle of nerves going up, it was all worth it in the end. I saw that everyone there respected me and recognized that my talent for writing is something to commend. All of the speakers were so welcoming and understanding, I truly felt like I belonged.

At the end of the protest, the speakers and organizers had a group photo taken with both hands curled into a fist, with the knuckles meeting each other, as it is a symbol of solidarity with the most affected people and areas (MAPA), areas that are the most vulnerable to the effects of and are bearing the brunt of the climate crisis. Soon thereafter, Mohammad thanked everyone for attending and marching for environmental justice, and he closed by urging everyone to educate other people about pressing issues.

Despite the fact that the majority of us that were protesting were minors, we used our creativity and clamored to be loud and have our voices heard. The fight isn’t over for racial and environmental justice just yet. This was a step that everyone at the protest took together in support and solidarity of Black Lives Matter and the climate justice fight.