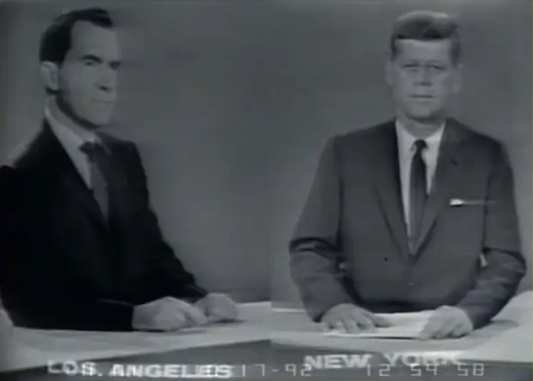 On October 13th, 1960, presidential candidate Richard Nixon was standing in a TV studio in Los Angeles, while 3,000 miles away, nominee John F. Kennedy prepared his points in New York. The debate was presented through a split screen on national television, while the ABC News moderator, Bill Shadel, was in Chicago. Though Kennedy and Nixon were on opposite ends of the country, they were able to hear and see each other live, as each one responded to the question, and the other watched him on the TV. To preserve the formality of the presidential debates, the candidates were placed in identical studios, carbon copy lighting, and spoke at the same podiums, making it seem as if they were in the same room. A can of paint was flown overnight from New York to Hollywood to ensure identical background colors. ABC studios even built the same bookcases filled with law books for each candidate, but it was discovered that the cameras’ frame could not fit the bookcases, and the work went unused.

On October 15th, 2020, the second presidential debate between Joe Biden and Donald Trump was intended to follow the Kennedy-Nixon virtual format, in an effort to protect both candidates from the coronavirus, as Trump had tested positive weeks earlier. However, Trump claimed “unfair conditions” and refused to participate in a virtual debate format. The debate was subsequently cancelled and replaced with competing Town Hall meetings. In an interview with Fox News, Trump said, “I’m not going to waste my time on a virtual debate, that’s not what debating is all about. You sit behind a computer and do a debate, it’s ridiculous.” Trump’s decision was driven by his theory that a virtual debate would open the door to “cheating,” sparking a wave of criticism and concerns among Trump’s supporters about the morality of the virtual debates. The first concern was voiced by President Trump himself, stating that he could be muted by the moderator, providing an unfair advantage to his opponent, and insinuated the moderator would be biased towards Biden and mute Trump in an unwarranted way. This statement alluded to the fact that Trump interrupted Biden and/or the moderator 128 times in the first debate. Furthermore, Trump expressed his concerns about “cheating,” in which Biden could have cue cards held up or information fed to him during the debate, providing him with an unfair advantage.

Trump’s concern about cheating led to a historical parallel between the virtual debate of 1960. In the handbook of the presidential debate, having prewritten notes is unlawful and violates the rules of the handbook. In 1960 Los Angeles, moments before the debate, Richard Nixon watched his opponent in Manhattan drop a few papers he was holding. Surprised that Kennedy was not called out for violating the rules of the debate, he inquired about the papers. In response, Kennedy stated he had one publicly published document—President Dwight Eisenhower’s letter about his policies—that he was using to “accurately” speak on foreign policy, which did not violate any guideline as it was so he could cite his information on the United States’ current foreign policy. Nixon remained skeptical, prompting Kennedy to phone the Associated Press and fire back, “If I’m going to quote the president of the United States, I think quoting the record accurately is in the interest of these debates.”

Though Trump argued his points on why a virtual debate should not take place, journalist Brian Stelter offered another potential explanation for Trump’s refusal to participate in virtual format: “There are understandable reasons why Trump would want to opt out of a virtual debate. The format itself—with the two candidates in competing boxes on screen, socially distanced from one another—will be a reminder of his administration’s failure to contain the coronavirus.” With the election approaching in less than three weeks, the quote serves a dire reminder of what is at stake.

To watch a recording of Kennedy and Nixon’s virtual debate, click here.